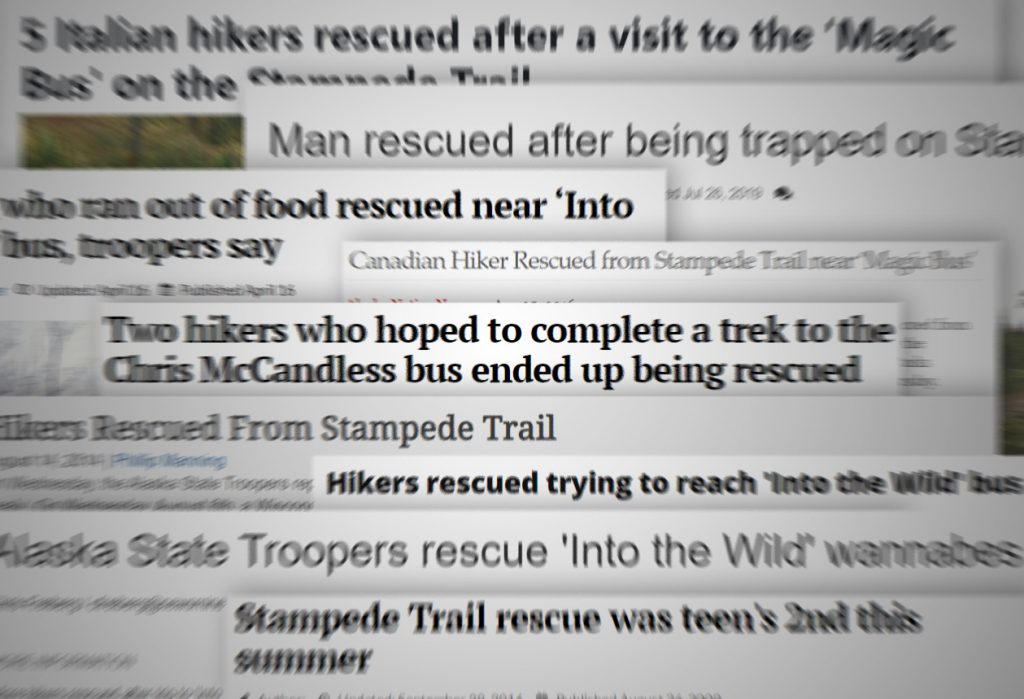 The removal of the bus has saddened many, but we can assure you the Alaskan officials did not make their decision in haste. Yes, most travelers did make the trip without incident, but there were many that did not. In the shadow of Chris McCandless’s legacy, sometimes people seemed to forget that Chris himself did not live to share his own story. He was the first person stranded by the Teklanika River, and that ultimately led to his death. As visitors to his final resting place increased, the growing number of rescues, and recoveries of those that lost their lives, weighed heavily on the local community, government & first responders.

The following list is just a portion of the numerous rescues that have occurred over the years on the Stampede Trail. In an article by Eva Holland, Tri-Valley Volunteer Fire Department Chief, Rusty Lasell is said to have rescued 12 hikers in a single summer.

August 2014 – Three Hikers Rescued After One Sustains Injury From Axe

The bus no longer rests on the Stampede Trail, but the hike is no less dangerous. If you’re looking for an immersive experience within the natural beauty of Alaska, please check out our suggestions here from FOB142 team member, Erik Halfacre.

For those of you who insist on taking the risk of visiting the former site of Bus 142, please be sure that you limit that risk to you alone. In addition to the expense of rescues, born by local taxpayers, they also put rescuers into harm’s way. You can mitigate the risk to yourself and others by thoroughly doing your research before your trip. Experienced hiker Jamie Compos, of DownTheTrail.com details what you will need to know on his site.

Also, we encourage you to visit Bus 142 at the University of Alaska’s Museum of the North after the exhibit opens. Sign up for updates about the project’s completion here.