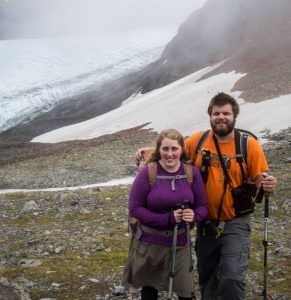 Though I was born and raised in Alaska, my first experience with Bus 142, like many others, was through Sean Penn’s film Into the Wild. I was an eager twenty-one-year-old when the movie came out in 2007, sparking the idea for a visit to the Magic Bus. But it was already fall in Alaska, too late in the season to plan the hike. Over the course of the next two years the idea of visiting the bus continued to grow in my mind and I began to do my research.

First, I skimmed through Jon Krakauer’s book, on which the movie was based. At the time I was only interested in the parts pertaining to Chris’s time in Alaska and specifically the Stampede Trail. I printed out topographical maps of the area, and I searched high and low online for some specific information on the location of the bus. Eventually I came across a set of coordinates but that was it.

Most frustratingly, I came across a page on the Denali Chamber of Commerce’s site that claimed to reference information about hiking to the bus. When I clicked on it, it was just a map of the area without the bus or trail marked, accompanied by a canned statement. I don’t remember the exact wording all these years later, but I do remember the tone and the point: Don’t try to hike to the bus. It’s too dangerous. This irritated me, because already in 2007 stories of rescues on the Stampede Trail had started to circulate. I wondered how anyone could possibly prepare for the trip properly without the right information. What dangers could I prepare for if no one would tell me what they were?

Now, with Bus 142 having been removed, I’m sure many of you feel like I felt back then. Who were these people to decide what level of risk was appropriate for me? As a stubborn young Alaskan with plenty of hiking experience, I decided that I would make it to the bus, that I would document my trip, and that I would share as much information as possible. That way others could accurately assess for themselves whether the trail was within their capabilities and then prepare appropriately for it.

Since my first successful trip in June of 2009, I tried to visit the bus a total of four more times. Of those trips, I turned back twice because of trail or river conditions, once even while I was guiding paying clients in 2016. Despite the fact that I have lived in Alaska for over thirty years, have a tremendous amount of backpacking experience, and have a keen eye for reading moving water due to my time as a river guide, my personal track record of successfully reaching the bus is only at 60%. More importantly, I have a 100% success rate of getting back home, which brings me to my most important point.

I greatly admire Chris. I’m inspired by his willingness to sacrifice comfort and conformity and seek out the fullness that life has to offer. I’m impressed by his ability to survive where he did for as long as he did in one of the least hospitable environments he could have sought out. Ultimately though, Chris died. He doesn’t get to tell you the story behind each of his iconic photographs because he is no longer with us. He didn’t get to take the lessons he learned from two years of wandering and apply them to his future relationships and life’s work, because that all ended in the bus on the Stampede Trail in August of 1992.

In 2014, while guiding Chris’s sister Carine and a group of our combined friends, we had a conversation at the bus about acknowledging Chris’s mistakes. Carine spoke of countless young people who come up to her after seeing her speak about Chris and his story. They tell her that they are inspired by her brother and want to head out and do “exactly what Chris did.” She told me that hearing those words always concerns her because they seemed to be glossing over the fact that Chris died. That loss is very real to her, and it is her hope that people learn from and be inspired by Chris to foster their own adventures, but not meet the same end.

In the spirit of acknowledging the lessons to be learned from those who have come before us, I urge those of you still determined to hike the Stampede Trail, and those of you interested in its history, to take a moment to review its history of rescues, accidents, and deaths.

I know many of you reading this feel a strong pull to visit Chris’s home on the Stampede Trail. I also understand that in many instances, that draw is even spiritual. But here’s my question to you: With the bus now gone, and along with it much of the context for understanding Chris’s experience of that place, what is the ultimate goal of your trip? Is it just to see where Chris died or is it to honor his adventurous spirit by freeing yourself from conformity and having a real adventure of your own?

I believe that the Stampede Trail deserves a rest. Ever since Into the Wild (both book and film) were released, the Stampede Trail has seen an increase in traffic that has changed its lonely wilderness into somewhat of a tourist attraction. Perhaps now the land west of the Teklanika River in the Stampede corridor, where bus 142 once rested, can go back to being the place it was when Chris laid eyes on it that spring of ’92.

I realize that to some of you my words sound much like the words I so resented when I came across them more than a decade ago on the Denali Chamber of Commerce site: Don’t try to hike to the bus. It’s too dangerous. To you, I offer this: There are many more ‘buses,’ magical destinations tucked into forgotten wilderness, wild open places where you may test yourself against the indifference of the land. Chris found his bus, and I would encourage you to find yours, whatever that might mean, rather than take such great risk to travel the well-worn path of the Stampede Trail just to see where the bus used to be.

For those of you who will not be dissuaded, please prepare carefully and do your research. Don’t visit in the mid-summer months when the river is at its highest. Plan your trip in late May or early September when the river tends to be lower. This is still no guarantee, but it’s your best shot. And most importantly, accept the very real possibility of having to turn back. Remember, I only made it there 60% of the time, and if you’re not an experienced backpacker from Alaska, your chance of success is significantly lower. Ultimately getting home is the goal, not getting to where the bus used to be. That’s just the halfway point.

While it is unfortunate that the bus was removed, remember that Chris chose the Stampede Trail specifically because it was not well known nor well traveled. For those of you willing to try something different in order to experience the ‘real Alaska’ and truly honor Chris’s wandering spirit, I suggest you forge your own adventure on a less infamous path. The following are my four favorite backpacking trips in the state:

North of Seward, Lost Lake is a through hike of about fourteen miles than can be made by starting at the Primrose trailhead and hiking through to the Lost Lake trailhead.

This hike is incredibly beautiful climbing from a spruce forest, to up above treeline where Lost Lake sits nestled among alpine tundra.

This trip is the easiest and safest on this list and is great if you want to experience Alaskan wilderness without the more extreme hazards of some of the other trips on this list. Bears are still common however, as they are statewide, so practice being bear aware and make plenty of noise to announce your presence to wildlife.

Campsites are plentiful and water sources abundant near the lake. Backpacking to Lost Lake is a great experience that I gladly recommend to anyone spending time in the Seward area

Another classic hike in the Seward area is Caine’s head. Visit the ruins of World War Two bunkers at Fort McGilvray at the end of a 7.5 mile coastal hike.

Be sure to time your trip appropriately though, as a rock cropping somewhat less than halfway along the trail needs to be navigated around at low tides of less than three feet.

There are great campsites at North Beach with access to fresh water, as well as lockers to keep your food safe from the local bears.

An alternate return hike along the alpine trail offers a change of scenery and amazing views of Resurrection Bay.

Almost entirely above tree line, this twenty-nine mile hike in interior Alaska is a great way to get some amazing views of Denali, assuming the weather cooperates. High alpine meadows are filled with blueberries and wildflowers depending on the time of year you visit.

Of the hikes listed here, this one is in the closest proximity to the Stampede Trail, but offers substantially better views, chances for wildlife viewing, and unique geology. This adventure is also closest to Fairbanks, where Bus 142 now resides at the University of Alaska Museum of the North.

Crow Pass is everything an Alaskan adventure should be. In the twenty-three miles you will cover between Girdwood and Eagle River, you get to experience a high mountain pass with views of Raven Glacier, and a deep river ford with views of Eagle Glacier. Glaciers are just the beginning though. Bear sitings are common, as well as moose, mountain goats and other wildlife.

Though the trek can comfortably be done in two days if you want to turn it into a three day trek consider reserving the Forest Service cabin at the top of the pass: a beautiful dry A-frame that will set you up for an all downhill second day of your trek.

If you only have time to do one backpacking trip in Alaska, I cannot recommend wholeheartedly enough, that this be the one that you pick.

“There is pleasure in the pathless woods, There is rapture on the lonely shore, There is society where none intrudes, By the deep sea and music in its roar; I love not man the less, but Nature more.”