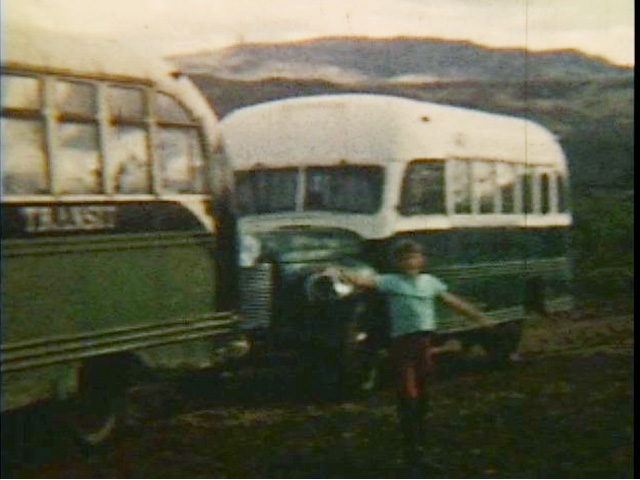 Mickey Hines in front of Bus 142 in Lignite, Alaska 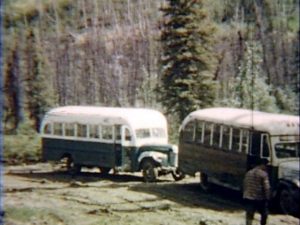 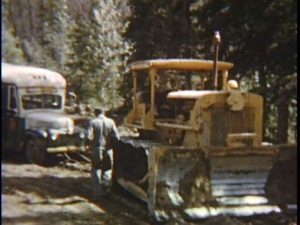 How the buses were moved from camp to camp 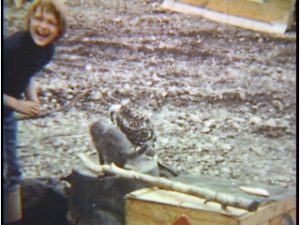 Mickey with baby eagle and cat 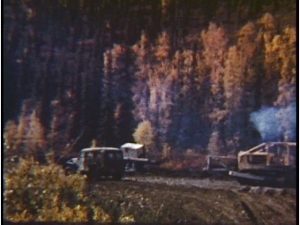 Camp on the move 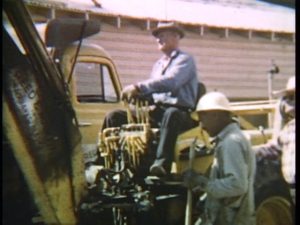 Jess Mariner on the backhoe in downtown Fairbanks, Alaska

In May of 1996 I was walking among the shelves of a bookstore in Burnsville, Minnesota, when a new release caught my eye. I didn’t recognize the name of the young author, Jon Krakauer. But the haunting image of an old bus on the front cover, nestled in the tundra and covered in snow, stopped me in my tracks. The book was Into the Wild. When I picked it up and read further, I realized why that bus looked so familiar. My father, Jess Mariner, worked for Yutan Construction, and during the summer months of 1961, my family lived in that bus.

My name is Mickey Mariner Hines. My dad was the heavy duty mechanic and the only man to bring his family along on the crew’s daunting assignment to build an access road between the Alaska Railroad and an antimony mine located at the far end of the Stampede Trail. I was a 10 year old girl at the time, and it was a summer of wonderful adventure in the middle of the wilderness, camping with my brother, mother & father and the rest of the crew. There were four buses in our caravan. We made our way down the trail as their work progressed, camping beside riverbeds along the way near fresh water & fresh fish dinners. Dad named Bus 142 our “boudoir” and another was our “galley,” which was outfitted with a cook stove and table. The other men of the camp lived in two orange buses, one was the cookhouse and one the bunkhouse. These were not 4×4 trail ready vehicles by any means, so they were pulled behind bulldozers, which we called “cats”. When the work was completed, the Yutan crew hauled three of the four buses back to civilization. Bus 142 was left behind on that crest above the Sushana river with a broken axle, and soon thereafter served as a shelter for moose hunters. Treacherous weather & river conditions proved too costly for the state budget, causing the road development project to be abandoned. Eventually the dirt road was overtaken by nature, and decades later, a young adventurer named Chris McCandless made 142 a summer home again.

It saddened me to see that Bus 142, having had a history before Into the Wild made it famous, was so badly vandalized by some locals, and the dangers of the trek to reach it not respected enough by some outsiders. It was surreal to see our “boudoir” flying above the trees underneath a Chinook helicopter. A far way to go from a bulldozed trail, and a book cover. Now that the bus has been removed and is on its way to a museum, I hope those in charge of its new home return it to some semblance of what it once was, and that those visiting pay it the respect it has earned from its years of uncommon service.