INTO THE WILD SOUNDTRACK

Into the Wild Soundtrack 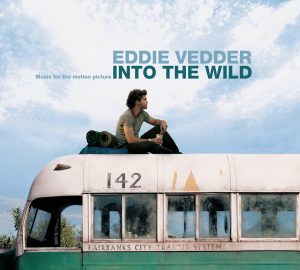 “It just kind of flew out. It felt like other things were at work. Things came through, musically and lyrically, that I really didn’t have to do too much work on. It felt more like just grabbing sparks around my head and putting them on the fire.”
– Eddie Vedder, LA Times interview

Eddie Vedder remains one of the most passionate and engaging frontmen in rock. Produced by Vedder and Adam Kasper, the soundtrack to Into the Wild is Vedder’s first full-length solo release. The songs are a mix of the rock-inspired tracks that he’s known for with Pearl Jam with folk-driven songs that are almost reminiscent of the musical accompaniment of Cat Stevens. Features contributions from former Sleater-Kinney singer/guitarist Corin Tucker and singer/songwriter/guitarist Jerry Hannan.

Setting Forth is a jangly-inspired track with hard-hitting bass drums led by Vedder’s awe-inspiring vocals as he sets the tone for the entire album in this short, mid-tempo number. The track also includes Vedder playing some jangly-like guitar riffs and melodies that is also accompanied by acoustic backgrounds.

No Ceiling is a slower, folk-driven song accompanied mostly by a banjo and a soft, slide guitar in the background. Vedder’s narrative-style lyrics definitely tells the story of Christopher McCandless going onto his journey to Alaska.

Far Behind is a mid-tempo rocker that fans of Pearl Jam will definitely familiarize themselves with as the two-minute track is a nice accompanying track for a good road song. And no, this is not a cover of the song by fellow Seattle band Candlebox.

Rise is a mandolin-driven track that continues the road-inspired narrative from Vedder’s lyrics as the song reflects McCandless’ journey while looking back at what he’s leaving behind. The two-and-a-half minute track is definitely an inspirational track with Vedder’s vocals being the highlight.

Long Nights is an eerie track led by Vedder’s bass-like vocals and jangly-guitar flourishes that emphasizes McCandless’ isolation in the city and everything that he despises. Vedder’s vocals and lyrics reflects the sense of confusion in the film’s protagonist as Vedder’s guitar playing is wonderfully inspiring.

TUOLUMNE is a one-minute instrumental of Vedder playing an acoustic guitar with wonderful melodies and riffs that conveys McCandless’ innocence into his exploration of nature.

HARD SUN, the album’s first single, is a cover of a Gordon Peterson song under his Indio pseudonym. The five-minute, inspirational song is played in the film’s final credits. The lyrics are definitely uplifting and reflect on McCandless’ journey. Vedder sings the song with his growling vocal style while accompanied by Corin Tucker. The song is played as a folk-rocker largely accompanied by an acoustic guitar that is followed by a drone-like guitar track that becomes a solo later on.

SOCIETY is a Jerry Hannan-composed song that is mostly an acoustic ballad in the style of Cat Stevens. Vedder’s vocals definitely set the tone without being too soft as the song definitely plays as an accompaniment to McCandless’ journey and isolation with the world. The Wolf is a score piece of Vedder playing an organ that is also accompanied by Vedder’s wailing vocals. The track is played during McCandless’ confrontation with the harshness that is nature.

END OF THE ROAD is a slow but elegant track with Vedder playing flourishing guitar chords as he sings the song filled with his lyrics of McCandless’ journey. The song is a wonderful cut that plays to the film’s theme of movement as it emphasizes McCandless’ journey and the people he met on the way.

GUARANTEED, the album closer, is a folk-driven track that features Vedder in his most romantic as the song is played with just Vedder and his flourishing, acoustic guitar. The song is amazing with its imagery and is played during some lovely scenes of nature that revel in McCandless’ innocence and the tragedy that would follow. It includes lyrics that Vedder says he penned specifically for Chris’s sister Carine McCandless. After the song is played for three minutes, there’s two minutes of silence until it returns with Vedder basically humming. The result is a calm, serene closer that ends the album very nicely.